No surprise, but we woke (before 10am!) to a winter wonderland! Bryan and I headed to breakfast while the rest of the group slept. Unfortunately, Henry, Eve and Brahm are still not feeling great.

The sun peeked its head above the horizon just long enough to radiate brilliant colors across the sky before going back to bed. I get it. The darkness is real, folks, and makes for very sleepy days. Also, it is impossible for me to convey the crispness and varied colors we’ve seen in the sky each day. The pictures just don’t capture it. 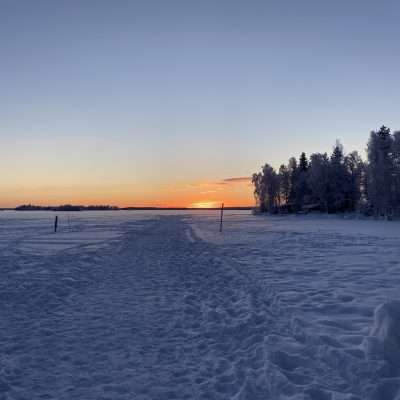 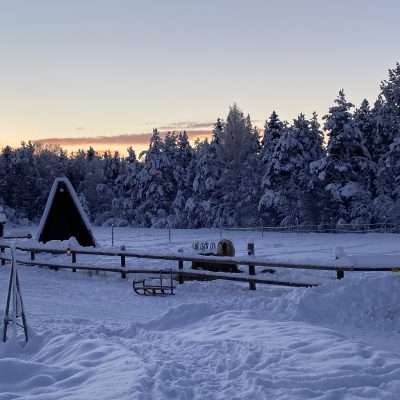 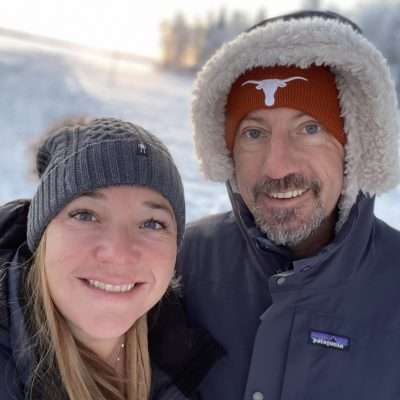 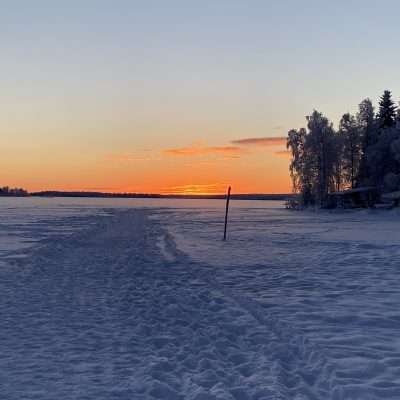 Just after breakfast we made our way down to the edge of the frozen lake. There were horses in the pen today. They are smaller than most horse I’ve seen, but larger than a Shetland pony. They hair is shaggy and their manes were trimmed short. They offer horse drawn sleigh rides in addition to all of the other activities, but this was the first time I’ve seen them around and they were pretty cute to look at and watch roll around in the snow. How are all of these animals never freezing! 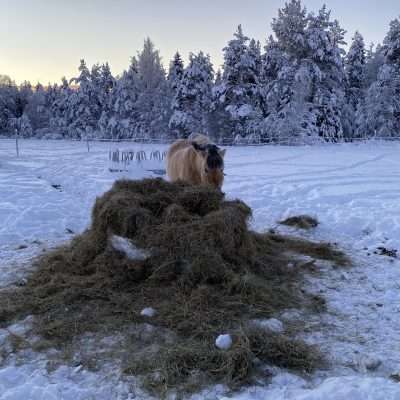 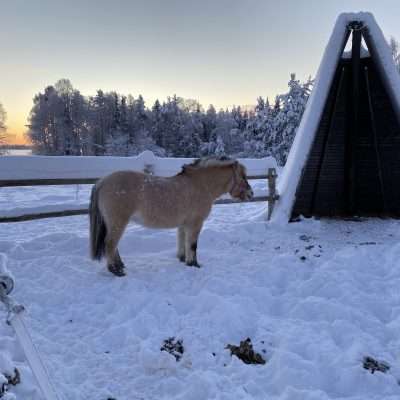 We headed back to the house and a few more people were milling about. Bryan went back to bed for a nap – again I say, the cold and darkness make you sleepy all of the time! Lincoln and I talked Nana into a few games of Dutch Blitz while Evie and Liz watched TV. Everyone else was asleep.

Our activity of the day was a reindeer driven sleigh ride through the forest. I fully expected to freeze. This is the coldest day and all of the locals say clear days are the worst and the best. The worst because it is so very cold without cloud cover to keep the warmth in and the best because the sky is clear and full of colors.

We packed on the gear – Bryan opted for 3 pairs of socks and 3 pairs of gloves/mittens in addition to the rest of his clothes and the winter jumpsuit. He also had his smartwool buff, hat and winter boots. It took us 20min to get dressed…again. I mean, the amount of time we spend getting into and out of our winter gear is almost as long as our daily activities. Speaking of, I am so glad that we only booked 1 activity per day because otherwise I don’t think I would still have feet. Or fingers. I have also noticed the strangest thing – as soon as I step outside my nostrils start to feel kind of funny. I realized yesterday that is the snot freezing instantly in my nose. Never had that happen before! 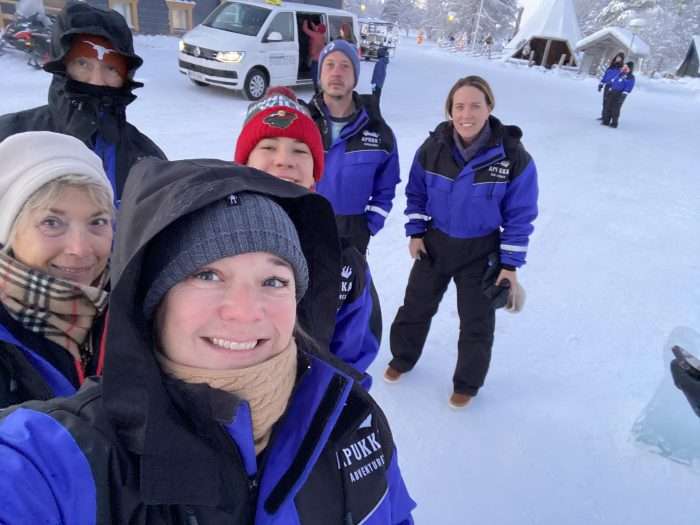 The strong and mighty, geared up and headed to the meeting place for the reindeer rides. Evie, Brahm and Henry all stayed home in hopes of better health this evening. We walked across the busy highway to the reindeer yard and loaded into the sleighs. All of the sleighs and harnesses are made by local tradespeople using the traditional methods of construction with traditional materials. 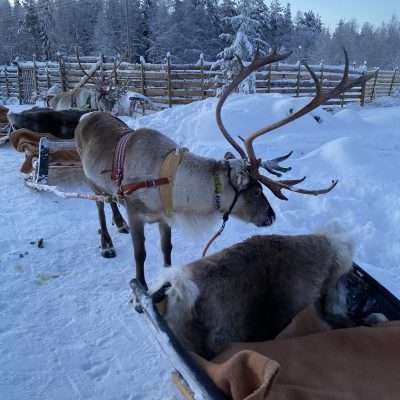 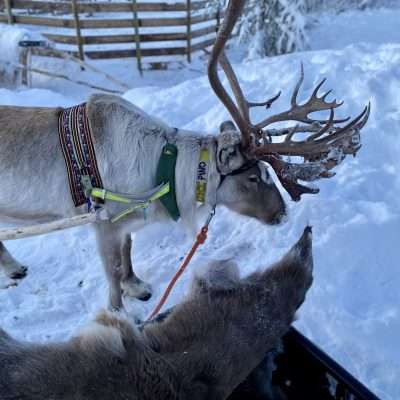 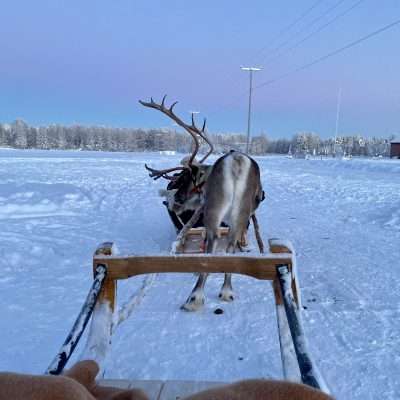 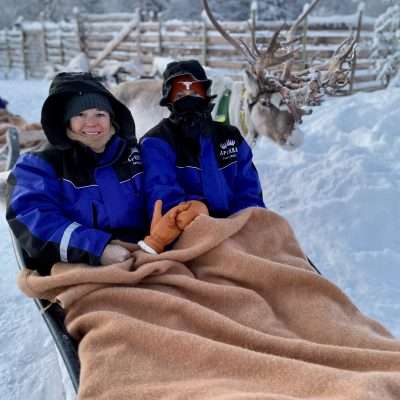 The sleighs were draped with reindeer hides and a pretty thin blanket and we paired up and settled in. I was already cold from waiting on the rest of our group to arrive at the meeting place, so I felt pretty ominous about a 45min sleigh ride with no physical activity to keep me warm. The reindeers were connected together in a caravan style with one behind the other. They warned us ahead of time that a reindeer might come up from behind and stand next to you and to not be alarmed. Thank goodness for the warning.

Our reindeer was second in line behind the one pulling Liz and Kelly and mom and Lincoln were behind us. Our reindeer really had ambitions of being a lead reindeer someday and wanting someone to notice his capabilities. Today. While on our adventure through the snow-covered forest. He spent the entire journey to the left of Kelly & Liz’s sled meaning that his head and giant rack of antlers were cozied up next to Liz’s head. Now, that may not seem like much other than being more aware of Blitzen’s head movements, but what you are not thinking about is how that might have effected our sleigh. While everyone else enjoyed a peaceful, slow-paced ride through the forest, Bryan and I were treated to the off-roading version. Imagine driving down a narrow, winding, tree-lined road directly behind another car. Now imagine veering off of the narrow road, onto the “shoulder” as though you wanted to pass, but instead of passing you just hang out of the rough edge of the road beating your car all to hell as you roll over rocks, jump logs and very nearly flip your car on a boulder – not once, but three times – before coming to rest for a pee break on the edge of the frozen lake. Now, make that car a sleigh with no breaking, steering or acceleration capabilities. And no protection from the numbing cold.

So to recap, Liz had to make sure she didn’t get brained by antlers, Bryan and I did our best to remain in the the sleigh despite the new trail we were forced to cut, and mom and Lincoln just had to avoid a steady stream of poo from their reindeer.

But in all seriousness, it was beautiful. I am in awe of how these animals can pull us around with relative ease. The guide told us that the short distance of only 2km is nothing at all to them. The are limited to only two tours a day. 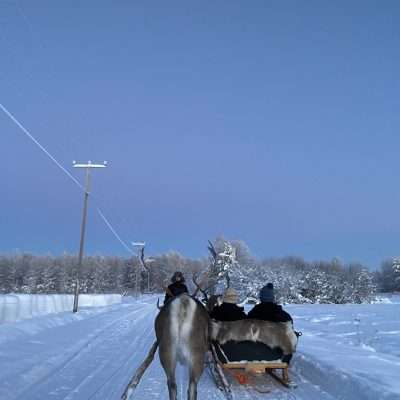 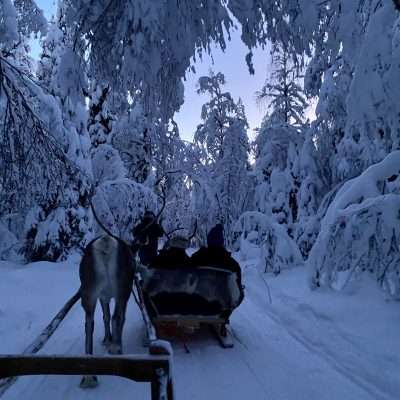 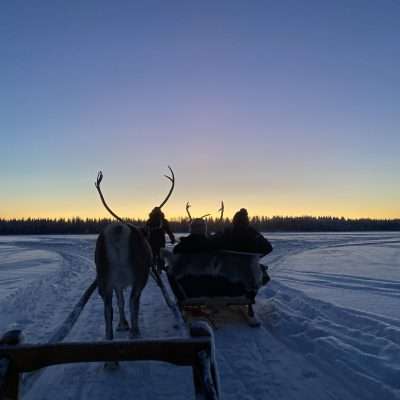 The reindeer were used as a primary way of crossing the land from farm to farm or farm to city to sell or trade or pick up supplies. There are still herders who mostly keep reindeer for their meat, but all of Apukka’s reindeer are all workers. They seem to have a pretty good life of working in the winter and grazing freely across Lapland in the summer. At the end of summer, all of the various herders, gather together in the grazing land and claim their reindeer again.

After the ride, we gathered in the warming up hut to sit by the fire and drink some warm juice. Then the guide gave us some lichen to give to the reindeer as a treat. She said it is like candy to them. With only a tiny bit of feeling returning to our feet, we headed home to warm up before dinner.

Our meals provided by the resort have not been the best, so we just got salad mostly and returned to the house to have a proper meal. Liz whipped up a delicious pasta sauce, mom made a tasty salad. Brahm, Evie and Henry all rallied for Christmas meal together. We exchanged our secret Santa gifts, ate chocolates, played a few rounds of BS and toasted to the gift of family being together for Christmas and the luxury of such a fantastic trip.

I headed back outside in search of the Northern Lights again with only a questionable streak. I’m not sure if it was anything, but Lincoln and I saw a faint, pale greenish band across part of the horizon. One more day to catch them dancing across the sky tomorrow. Fingers crossed.

I hope you all had a very merry Christmas and found some joy, some magic and a lot of love to celebrate.

I’m not sure you can tell, but my face is frozen

Up Next…Last Day in Lapland!