It was our last day in Helsinki, and what better way to end our stay, than a traditional Finnish Sauna. Christian, a family friend of the Stirmans, joined us today and will be with us for the rest of the trip. But first, we all drew names for a secret Santa gift for Christmas, and shopping was in order. We headed to Stockmann’s, a local department store, and shops for our recipients with a 20e limit! Not as easy as it sounds…

Next up, the sauna. I have been looking forward to this particular part of our trip since I first started researching activities. Sauna is such an important part of Finnish culture, that there are over 3 million saunas for a country of 5.4 million people – averaging 1 per household. The oldest sauna started as a smoke pit in the ground covered with animal skins. Then they upgraded to wood burning and then electrical saunas. Often the sauna house was built before the house itself and as a separate structure. Saunas are a place of health, community and cleanliness. Women would give birth in a sauna before the 20th century.

Loyly (meaning steam that comes from throwing water on hot stones) Sauna was a fantastic experience and nothing like anything I have done before. The Baltic Sea bashed against the large bulkhead of the exterior of the building as we walked to the entrance. A low-lying fog prevented us from seeing much beyond the railing, but you could hear the seabirds and the water lapping. The cold air was heavy with moisture and huddled close around you. The sky looked as though it couldn’t decide if it wanted to rain or snow. The building itself looked like a bird sheltering from a storm, but as you stepped inside, everything changed.

Loyly is divided into two parts with a restaurant and bar on one side and the sauna facility on the other. The lighting is similar to that of natural glow of mid-morning and the curved walls and warm textures of the furniture welcomed you in instantly. We grabbed a quick bite to eat of a Brie sandwich and fries and washed it down with strawberry-basil kombucha before checking in for the sauna. 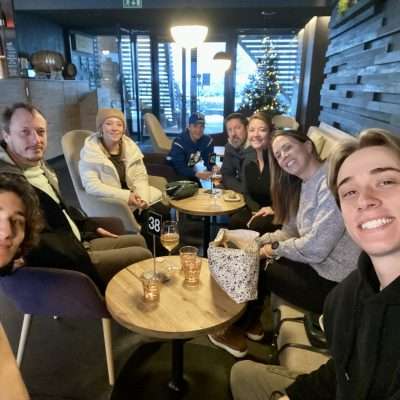 You are assigned a locker, given a towel and what looks like a hand towel and directed to male or female locker rooms to change into your swimsuit, shower and then exit into the common sauna spaces with the hand towel – pro-tip – the hand towel is actually a towel that you sit on in the sauna called a peflettes.

There is a large open area once you exit the locker room with a large square wooden bench and smaller tree stump stools surrounded by tall glass windows to the sea. On the right side is the wood-burning sauna with a clear door leading to three-tiers of wooden benches. The large, stone-filled stove has a metal lid that can be opened to throw water onto the stones. The room is hot when you walk in, but once the water is thrown on the stones, a creeping, oppressive steam fills the room, working its way from your toes to your nose and deep into your lungs. Anyone can lift the lid and throw the water on the stones, and it is impressive how quickly the temperature rises. Once you can no longer take the heat, you escape to the common room to cool down. Or if you are feeling brave, you venture into the Baltic. 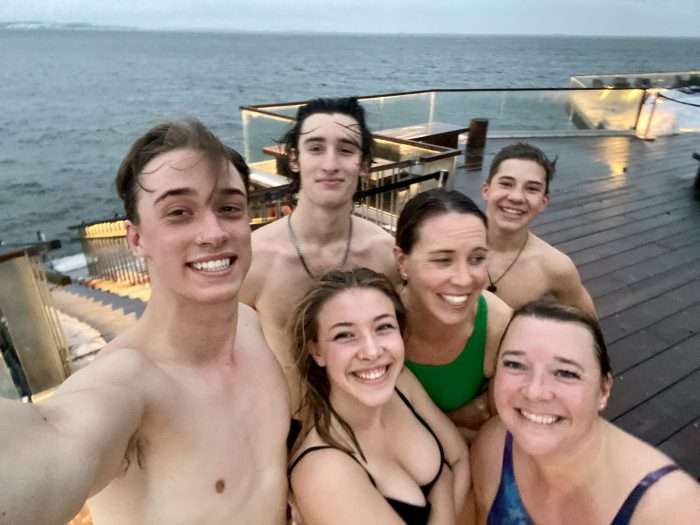 Almost all braved the Baltic

We dipped, dabbled and dunked into the Baltic – many times over. Amazing. We repeated the cycle of saunas to sea several times more before surrendering to satiation. We recovered with a cider or a beer and relaxed next to the fire in the sitting room. It was such a delight. We met a group of Finnish men in the sauna who said they come to Loyly each Christmas together as a tradition, and I only wish I could say the same.

After we sauced, Lincoln wanted to get in a bit of workout in the gym. They have a small gym in the hotel with the most amazing kettlebells and dumbbells! 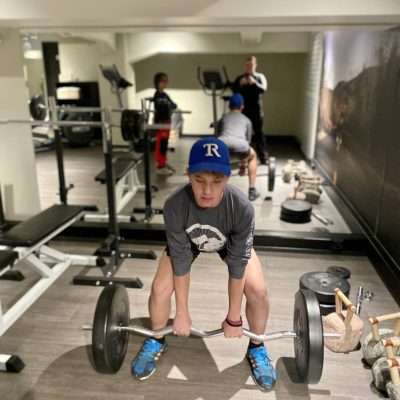 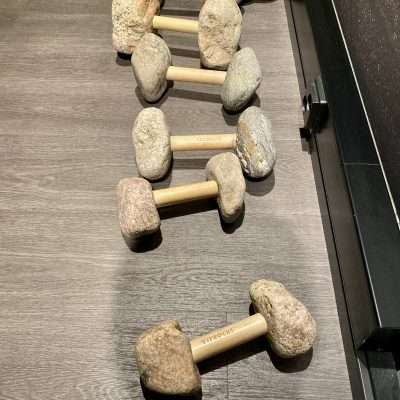 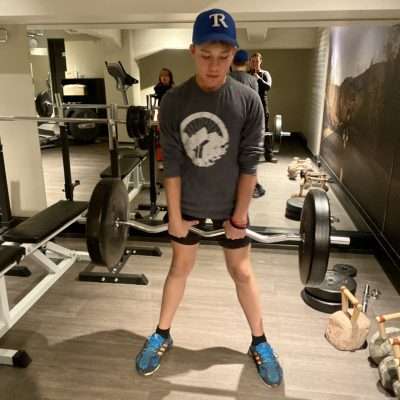 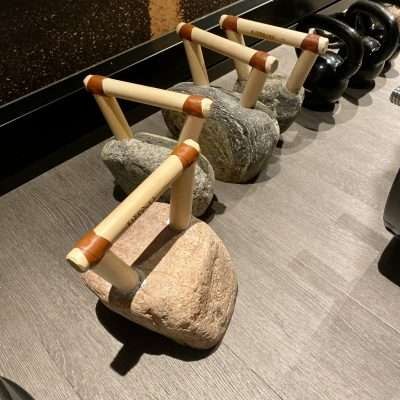 We regrouped for dinner at a place called Fisken Pa Disken. It’s a casual seafood place in the food court of a mall, but don’t let that fool you. It was delicious. We started with oysters, and Lincoln tried the seaweed on the tray! Liz, Lincoln and I had salmon soup and a green salad. Bryan and my mom opted for fish & chips. Kelly had grilled monkfish. Henry and Eve had beet risotto and Christian had Pike. Kelly selected 3 different wines for us including a cremant, a 1988 Riesling and a red from Ukraine. Yet again, the food was fantastic. 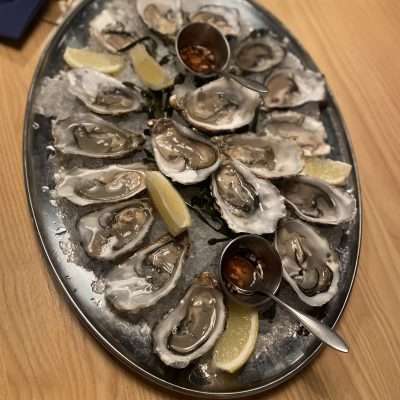 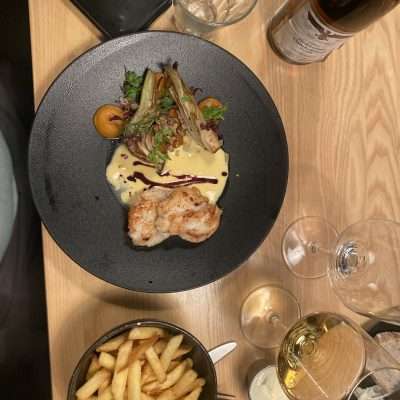 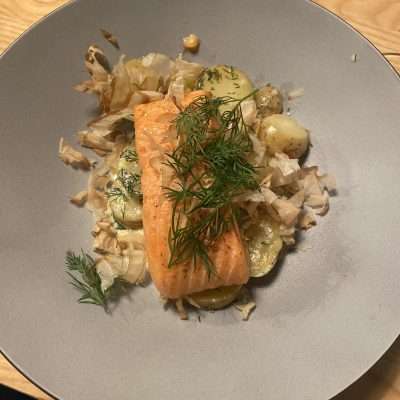 Salmon soup- before they poured in the creamy broth 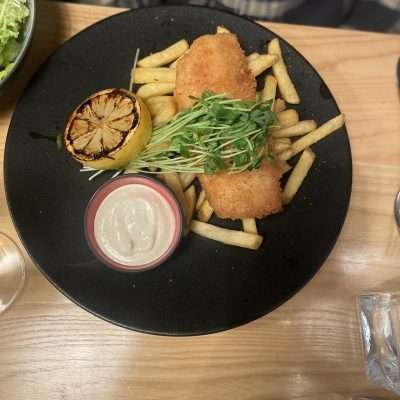 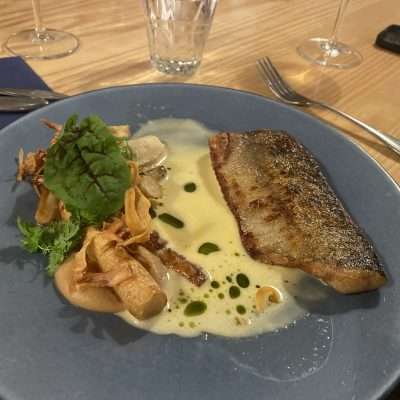 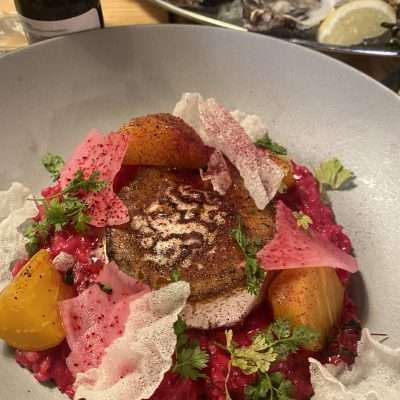 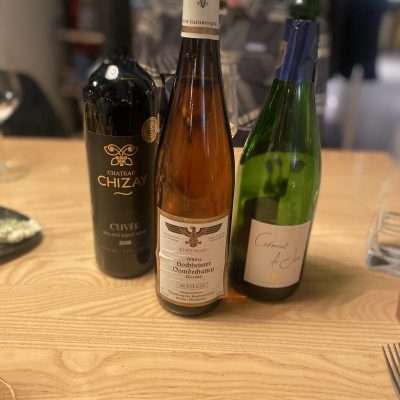 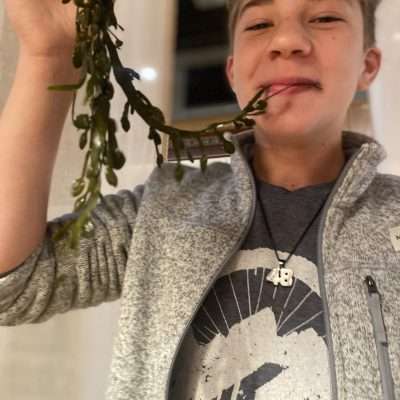 Tomorrow we leave Hesinki and journey north! I have to say, I am loathsome to leave the Lapland Hotel Bulevardi. The shower and sauna in our room – game changers.